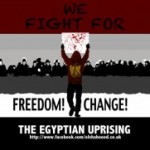 The Gaza Freedom March delegation in Egypt has taken over Tahrir Square in downtown Cairo in front of the Egyptian Museum! We began marching from the Egyptian Museum and blocked off the streets. Riot police was on the scene IMMEDIATELY and was very violent with our peaceful, non-violent protesters!

They have cordoned us off onto the sidewalk right in the middle of the square and we are making a huge scene! We’re on live news coverage from Al-Jazeera, PressTV, Reuters, AFP, etc. We’re here with our packed bags, sleeping bags, and plan on staying here until they release us…we are under siege in Tahrir Squaren in downtown Cairo!!