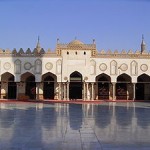 Last week, Sheikh Mohamed Sayed Tantawi, Alazhar University’s top cleric, passed away of a heart attack at the age of 81. He was indeed a very controversial figure both within Egypt, as well as the Muslim world as a whole. As Egypt scurries to find a replacement for Sunni Islam’s most prestigious seat of Islamic learning, many are wondering what this means for the future of Al-Azhar, its role, and whether it has been hijacked by the state.

Interesting tidbit of which I was previously unaware, and ashamedly so: the seat which Sh. Tantawi held, as the leader of Al-Azhar University, is actually a government post. Basically, the leader is a presidential appointee, instead of one who is chosen based on a general, scholarly consensus, as according to the traditions of Islam. This has been the case since the ’60s when Gamal Abdel Nasser nationalized the university and made civil servants (public employees) of its entire staff. Yep, the whole of Al-Azhar University is on the Egyptian government’s payroll, so now you know where ridiculous religious rulings like the “Wall of Shame” fatwa come from. Indeed, Al-Azhar University is cleverly used as a mouthpiece for the Egyptian government.

Regardless of what your personal views of Sh. Tantawi are, one thing seems to be very clear: his controversial, and at times, provocative nature has only served to strengthen the general, predominant view in Islam which opposes the idea of a single individual scholar with superior, unquestionable status (ie: “The Pope” syndrome). When just about anyone, from the most renowned university professor to the country-bound shepherd tending his flock, can criticize and ridicule a fatwa given by the highest authority in Islam, then the case for an Islamic super-authority is completely delegitimized, and rightfully so!

But the question still remains: will this be an opportunity for alternative movements to come into play? Or will it once again, be more of the same? Between this and the run up to the 2011 presidential election (and El-Baradei’s very public fight for candidacy), it looks like it will be a couple of very interesting years in Egyptian politics!