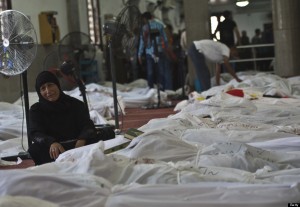 An Egyptian woman mourns over the body of her daughter wrapped in a shroud at a mosque in Cairo on August 15, 2013, following a crackdown on the protest camps of supporters of ousted Islamist president Mohamed Morsi the previous day. The day’s violence was Egypt’s worst in decades, exceeding even that seen during the 18-day uprising that ousted president Hosni Mubarak. AFP PHOTO / KHALED DESOUKI (Photo credit should read KHALED DESOUKI/AFP/Getty Images)